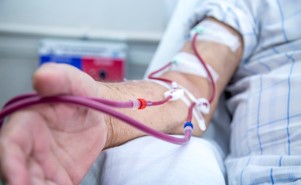 Health is certainly one of the Government's concerns because it is the basic foundation of a nation in maintaining the quality of its human resources to have the excellent economic condition. This is shown by the significant increase of health national budget in 2019, compared to the one of 2015. Public health facilities and funds are fairly distributed to reach all layers of communities and territories.

Data from BPJS (social security government institution) showed that in 2018, that Hemodialysis treatment was the second biggest expense borne by the Health BPJS. Hemodialysis is a long-term therapy that requires considerable costs because patients should come periodically, that makes service providers get the good opportunities to have a promising business income.

Patients of ESRD (end stage renal disease) will finally have to undergo the hemodialysis treatment because the remaining kidney function is only equal to or less than 15%, and the number of patients will continue to grow since diseases that trigger kidney failure, such as hypertension and diabetes are more frequently found. However hemodialysis service is found only in big cities, and not yet evenly scattered in all parts of the islands of Indonesia. According to the data, there are 400 patients in one million inhabitants. It means, if the population of Indonesia is 267 million inhabitants (in 2018) then the ESRD patients is about 106,800 persons. However, due to the limited number of health facilities, only 50,000 patients could be served. Most health facilities are located in big cities and are far away from the patients’ dwelling. These hemodialysis facilities are even rarely found in some rural areas in Indonesia.

From the data and the information mentioned above we can conclude that opportunities to run the hemodialysis facilities business are still promising because of the high demand and at the same time we can support the government to provide health facilities in some remote places.